In a time when Lebanon is suffering from multiple crises, The Beirut Foundation was born as an independent nonprofit that offers aid and relief to those struggling to survive and meet their basic needs.

The Beirut Foundation works on responding to the increasing humanitarian, economic, social, security, educational, and healthcare crises in Lebanon through various initiatives, projects, and collaborations. The foundation also works on spreading the word about the situation in Lebanon and conducting global outreach and a rallying cry for support. 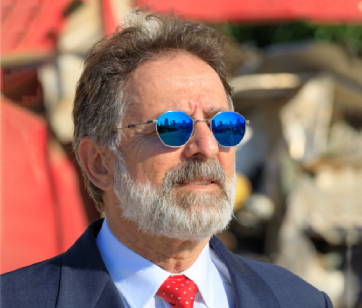 Thomas G. Abraham is a Lebanese American business entrepreneur and civic leader. He was born in Beirut, Lebanon, in 1952 and was adopted from the Crèche of St. Vincent at the age of four. He is the adopted son of the late Genevieve and Anthony R. Abraham, a successful entrepreneur, generous philanthropist, and the honorary consul of Lebanon in Miami for over three decades. Thomas G. Abraham lives in Miami, FL, USA. He attended the University of Miami and the University of Denver in the 1970s before embarking upon his business and philanthropic endeavors. He currently serves as Chairman of The Beirut Foundation - USA which he founded in 2021, as well as the Chairman of the Anthony R. Abraham Foundation, founded in 1976 by his parents who devoted their lives to helping others. Thomas G. Abraham also serves as president / partner in several family enterprises. He also serves as a Board Member of these charities: Camillus Health and House Concern, City Year, Emeritus Board Member for St. Jude Children's Research Hospital, the Lebanese American University, Rene Moawad Foundation, Beirut Marathon Association, and American Task Force for Lebanon. Thomas G. Abraham achieved widespread acclaim for his vision and cultural commitment to contemporary artists in founding Miami's StarArt Foundation, a non-profit charitable trust that matches internationally renowned artists, entertainers, and corporate sponsors with initiatives and projects for the benefit of charities and humanitarian causes. The StarArt Foundation works on tapping into the industries of sports, music, and art, and involving them in a dynamic way, in its mission to make a positive impact. He is committed to continuing to search out those endeavors that will help empower those in need; one of his most recent projects is the "Help Us Rise" relief initiative managed by The Beirut Foundation and supported by the Anthony R. Abraham Foundation. Help Us Rise aims to aid those who were affected by the third-largest explosion in history which devastated the heart and soul of the city of Beirut on the 4th of August 2020. Read More 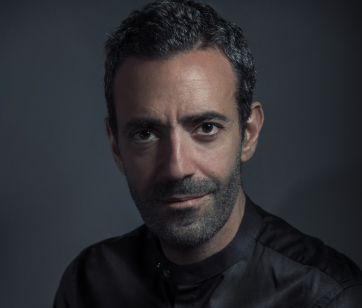 Co-founder and Board Member

Carlos Moubarak is a Lebanese architect and founder of Carlos Moubarak Architect, an architectural design studio based in Beirut with local and global experience. He is currently design director of the practice which develops a transversal approach through a multidisciplinary team and provides holistic design solutions. Alongside his architectural praxis, Carlos Moubarak has combined academic work as he has taught architectural studio at the School of Architecture and Design of the Lebanese American University (LAU) and at the School of Architecture of the Académie Libanaise des Beaux-Arts (ALBA). He was also a member of ALBA’s External Relations and Communications Committee where he was in charge of organizing conferences, workshops, and lectures with international architects and critics. Carlos Moubarak is regularly invited to participate as a jury member in architectural competitions organized by local universities and other architecture dedicated centers and foundations. Author of a thesis on the funerary architecture which developed into his final year project, Carlos Moubarak holds a master’s degree in architecture awarded with honours and multiple distinctions. He is the prizewinner of the Rifaat El Chaderji Foundation Award, the Beirut Order of Engineers and Architects Award, the Samir Mokbel Award, and the Official Selection at the Archiprix International Biennale. Following the terrible Beirut explosion that devastated the Lebanese capital on August 4th 2020, killed more than 215 people, wounded around 6500 others, and left 300,000 residents homeless and an entire population traumatized, Carlos Moubarak Architect launched Beirut Memorial Park, a civic initiative embodied in a global and emblematic cultural act. Based on societal, urban and architectural considerations, it is envisioned as a powerful and symbolic project that crystallizes the torment of the nation, as the people’s tribute to the victims, the survivors and to their beloved city. Read More 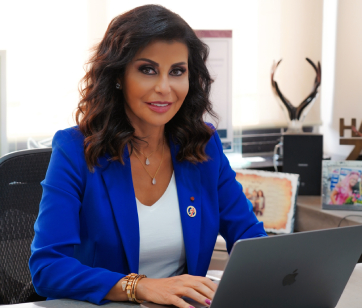 May El Khalil is the award-winning founder and president of the Beirut Marathon Association. The Beirut Marathon Association oversees the annual Beirut International Marathon, which has been held every autumn since 2003 and was accredited by the IAAF International Association of Athletic Federations in 2009. In 2013, the race and social movement attracted over 36,000 runners from 104 countries. Born in Aley, Lebanon, Mrs. El Khalil spent much of her adult life in Nigeria after her marriage to business man Faysal El Khalil. In Nigeria, Mrs. El Khalil became part of an international community and established the Lebanese Ladies in Nigeria, a non-governmental organization dedicated to providing assistance to the underprivileged members of Nigerian society and to promoting educational development by way of grants and scholarships. When Mrs. El Khalil returned to her mother country of Lebanon, she encountered inflamed religious divisions, political impasses, and military checkpoints on roads that were once open to all. In 2001 she suffered a near-fatal accident that placed her in a coma. Mrs. El Khalil spent two years undergoing dozens of surgeries that enabled her to walk again. Determined to celebrate the gift of life and mobility, she founded the marathon to help mend divisions in Lebanon. She wanted to shift the focus from that which divides the Lebanese people, and bring them together to celebrate that which they have in common. This mission became ever more important in the aftermath of Lebanese Prime Minister Rafic Hariri's assassination in February 2005, when the bustle of downtown Beirut came to a standstill, the Beirut Marathon Association organize the "United We Run" race that attracted 60,000 runners. Every year since, each race that the Beirut Marathon Association organizes unites thousands of people, including national political leaders and royalty, all this in the world's most turbulent region. Mrs. El Khalil has been recognized for her work nationally and internationally; she has received the AIPS Power of Sport Award from the AIPS in Lausanne, and the Laureus World Sports Academy Lifetime achievement award in Abu Dhabi. She has been decorated by Lebanese President Michel Suleiman with the National Order of the Cedar, and has been granted appreciation awards from the Lebanese Ministry of Tourism, The Brazil-Lebanon Chamber of Commerce, and the Lebanese Ministry of Youth and Sport. Mrs. El Khalil was also a Paul Harris Fellow of the Rotary Foundation of Rotary International for 2010 and 2011. In 2013 she was presented with an honorary Ph.D. from the Lebanese American University (LAU). In 2014, she was honored by the YWCA Lebanon on March 8 (International Women's Day ). She was also honored at the Annual SEAL Dinner (Social and Economic Action for Lebanon) held at the Metropolitan club in New York on May 16, 2014. Mrs. El Khalil spoke at the TED global conference in Edinburgh Scotland in 2013. There she shared the Beirut Marathon Association's story with an international audience, and she explained that she founded the largest running event in the Middle East as an instrument of peace through sports. The assertion she made in her talk was that "peacemaking was not a sprint, but a marathon", meaning that this kind of endeavor was a long race that requires commitment, endurance, and optimal belief in the ultimate goal. For May this optimum goal is peace and prosperity for her country, as she still runs her figurative marathon towards that goal. To date, Mrs. El Khalil's TED talk has been viewed almost four million times on the official TED Youtube channel, she was also a speaker in Brussels, at the Innovation Convention for the European Union. And in 2014 she received the the Fair Play for Peace Award by the Premio Fair Play Mecenate in Italy. In addition to her work at the Beirut Marathon Association, Mrs. El Khalil is a mother of four children and grandmother to four grandchildren. She speaks at different universities and organizations about the power of sport, perseverance, unity, and making the impossible dream of peace happen through running. Read More 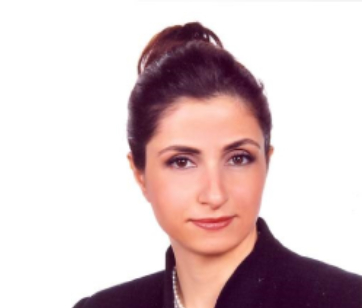 Nada Abdelsater, Esq., is an international lawyer admitted to practice in New York, Lebanon, and the Hague at the Special Tribunal for Lebanon. She is the founding and managing partner of ASAS Law, a law firm based in Beirut with activities throughout the Middle East, Europe, and the USA, as well as Africa. Nada holds a master in law (LL.M) from Harvard University. She holds a dual degree of French and Lebanese law from the St Joseph University (USJ), and a Bachelor of Science degree from the American University of Beirut (AUB), and she has completed the coursework of master in international affairs from the Lebanese American University (LAU). She is the recipient of the International Corporate Governance Award from Yale University’s School of Business for her international contribution to corporate governance. Ms. Abdelsater is a pioneer in the fight against corruption. She chaired the Transparency International Lebanon Chapter and was later the first woman from the Middle East to be elected to the International Board of Transparency International sitting in Berlin and present in more than 100 countries. She was also decorated by the Antonine University for her work in governance and transparency. Nada is the exclusive representative of ICC-Fraudnet in Lebanon, the leading asset tracing and asset recovery worldwide legal network operating under the auspices of the International Chamber of Commerce based in London. She is consistently named Leading Lawyer by the most recognized international legal directories including Chambers Global, Who’s Who Legal, and the International Financial Law Review. Read More